One of the most difficult things to do as a writer is balance showing versus telling. If there's too much action and not enough interaction the reader doesn't connect with the characters. Too much introspection and the story doesn't move the reader along. They get bored.

It's the same with men and women. I have this theory that men hold tight to their emotions because their anatomy expresses their interest as soon as awareness passes through them. The female anatomy is not as easy to read so women tend to verbalize their thoughts. Men show, women tell.

Men are generally action oriented. They're in a near constant state of movement, even when just sitting around; pages turn, channels surf, and worlds are invaded. Women talk;about their day, how they feel, what they wore. Men eat. Women discuss the menu.

These are generalizations truly but for the most part the hero makes the plan and enacts it. The heroine discusses the plan, the emotional ramifications of said plan and then talks all the way through it to make sure that the plan has not changed.

Oftentimes men and women encounter a few difficulties in their interactions because of these generalizations. It makes for great fiction but rocky relationships. I'm exploring new characters in two different projects. In both cases the heroines are more introspective than the heroes. There's a lot of analysis on their parts as they explore all of the changes in their lives. The heroes picked up stakes and moved to explore new worlds when they couldn't fix what was wrong with the old ones.

It's not that men are incapable of talking about how they feel. They are more comfortable with showing. They bring flowers and chocolates, build a potting shed, or drive to the dentist. Women say "I love you".

If you're struggling to understand the opposite sex watch the man, listen to the woman. You never know what you might learn.
Posted by Keziah Fenton at 3:44 PM No comments:

It's been three weeks since I finished reading The Art of Racing in the Rain by Garth Stein. While I don't think you need to care for motorsports, I do think you need to appreciate dogs as the entire book is told from the dog's point of view. I don't need to tell you why it resonated so strongly for me.

Subject matter aside, it was beautifully written. A nice clean writing style that used every word. Nothing was wasted or extraneous. I was impressed with the way the author carried the racing metaphor throughout without overdoing it.

"Your car goes where your eyes go." Every driving instructor tells you that in driver's ed and it's true. If you're looking to the left, the wheels will drift in that direction. I've been looking forward with Casey and it's paying off. (thank you all for the words of encouragement) In racing winning is important but so is finishing the race. You never know when you'll need those points further down the road to the championship.

Right now my eyes are on my family and friends. The car is parked for the next week and I plan to enjoy the holidays. I wish you all the opportunity to do the same.

In that vein, Merry Christmas 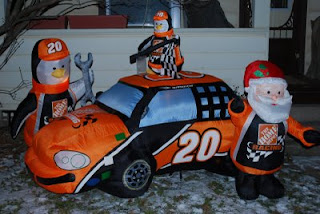 Email ThisBlogThis!Share to TwitterShare to FacebookShare to Pinterest
Labels: impre

Nathan Bransford, an agent with Curtis Brown literary agency had a contest in which people posted the first paragraph of their novel. There were 1364 entries.

I had a difficult time deciding between Alex's story and Gabriela's. They're both good. Her's had a better opening but his was more recent. I tweaked the heck out of Alex's beginning.

I've always loved the opening sentence. It's rhythm, word choice and energy sum up Alex's mood and set the tone for the book.

By the time the Niagara River rushed northward, spilling over itself and careening off rocks in its haste to crash against the base of the old power generating station less than a mile from the crest of the Horseshoe Falls, its anxious roar was the perfect accompaniment to the mental state of the building’s lone occupant.

The other thing it did really well was slow down the action and jar the reader when the second sentence was from Alex's perspective. I cut it.

In the end, I was entry number 11-something.
Posted by Keziah Fenton at 9:40 PM 2 comments: 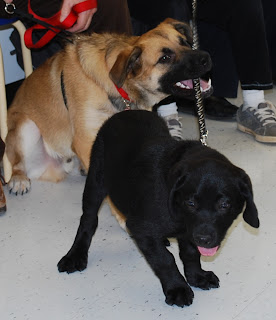 Every time I take Casey to the chiropractor she asks me if I've figured out why he's come into our lives. I have several answers; he's healing us, he's not limited by his disability,he doesn't recognize he even has a disability, not to give up even when it's hard.

As writers we show that which serves the story best. I don't know the end to Casey's story. I hope it's triumphant - with four legs running along the canal beside his brother Ky. When I write in the journal the victories that lead to that happy ending are the ones I record. The hiccups and obstacles that could lead to the loss of his leg are glossed over; not even written until they are hurdled.

Today was different. And I'm recording it here, without edits and as few slants as I can manage, for a variety of reasons. I'm no longer sure that my optimism isn't delusion. I'm no longer certain of his commitment to the battle. The big picture is still influenced by my will.

He cried in the car all the way to the appointment which isn't like him at all. He's great in the car, neither his bladder nor bowel needed emptying. Once there he sniffed around outside then jumped up to hug his beloved healer with both front legs. Inside her office he lay down on the adjustment table and whimpered. His shoulder hurt. A thorough examination revealed that on top of everything else, Casey has slipped his rotator cuff(that was not the technical diagnosis). A specific massage was added to the rest of his therapies. And this time when asked why he came into my life I answered, "Because he teaches me not to give up."

On the way out to the car, we were approached by a woman who does quantum healing from a distance. While I have little idea what that is, we agreed to let her work on Casey. She didn't need our presence, only his name and we're grateful for every positive thought sent his way.

Driving home, he started to cry again. I glanced in the back seat to see him lying on his injured side. "Silly dog. Get up and lie on the other side. It will hurt less," I told him. He immediately did as I suggested and stopped crying. Smart boy! I was so impressed he listened.

At home I changed, clipped him into his life jacket and jumped into the hot tub. This was the first time doing it on my own. I couldn't reach the jets and hold him. I forgot the timer. So he swam while I counted. Slower and slower until he just stopped.

No matter what I said, he wouldn't swim. I lifted him, turned him, stretched my arm to reach the jets. Nothing. He hung there limp and stared at me.

I sank to my knees and let him drift his weight onto my thighs. He tucked his head on my shoulder and we sat on the bottom of the hot tub. And I wondered if maybe he wanted to quit after all.

So I asked him. I told him there was no shame and that it was okay. That if he was tired, we could stop. If he wanted to give up the leg and run fast with three that we could do that too. I told him it was his body and up to him how we proceeded.

With just each other in the relative silence we sat together and I let him decide what to do next. I have no idea how long we sat there while the water boiled around us, bubbles popped around his chin and my arms. Mist hung over the garage and tears blurred my vision.

With a tentative kick, Casey slid off my knees and started paddling. Slow at first, then stronger, steadier, faster. I stood up and supported him. Cheered him and praised him.

There may be no quit in Casey but today he reminded me that there are times when you need a little break.
Posted by Keziah Fenton at 2:21 PM 6 comments: