Home is where the heart is?

I've been thinking about Home a lot. My personal living arrangements are in flux for one thing. My characters have no idea where they live for another.

Is where you live home? Not for Alex. The son of a diplomat he's grown up all over the world. As an adult, he has a home base but lives out of suitcases and backpacks as he travels the world chasing one extreme adventure after another.

Nea was booted out of her mother's home when she was young. Her father took her in, but as a weather demon, had no fixed address. They went wherever his mood took them. As an adult, her vagabond existence never changed.

I couldn't set the story all over the place. For various plot and health reasons, Alex needs to be grounded in one spot. It's driving him crazy. I was nice enough to put him into a converted version of the old Toronto Power Generating Station at the top of Niagara Falls. 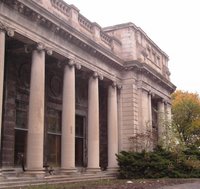 The inside is even more spectacular. Whenever I get stuck, I can drive over there and look at Alex's view. The building is perched right on the edge of the Niagara River, close enough to drop a kayak into the water. The roar of the Falls fills him with despair.


Nea grew up for a few short years inside a fairy forest. As soon as I saw this picture, I knew she longed to return here among the moss. Secretly and so deep down inside her consciousness that even she doesn't know she longs. The scene of a traumatic life defining moment, it holds great power over her. But it's not home. She has no place she considers Home.

And neither one of them seem to be attached to any one place over another - despite her secret longing and his determination to return to Belize. They are children of the earth. The whole world is their home. With neither one of them knowing where - or who - their heart is, they are destined to wander.

Eventually they will make a home together. Likely some time in the future after the story is told. And that home will probably be wherever their suitcases and backpacks fit. Neither one of them would be happy settled in one spot. There home base will be determined by convenience not comfort, nor familial ties. Bits and pieces of their hearts are scattered throughout the world. Together they will gather them up and reform their own definitions of heart and home.

I took the photo of Alex's home, Nea's is courtesy of Bryan J Weitzel at bjwcreations.com
Posted by Keziah Fenton at 5:33 PM