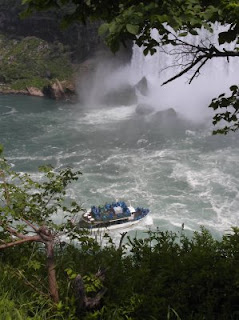 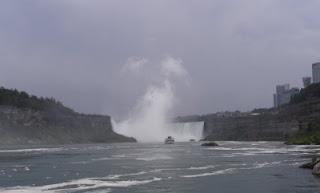 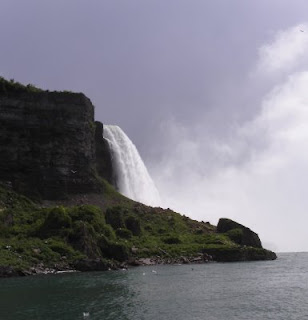 I'm hoping I've described the falls well enough that you'll feel like you've experienced it for yourself. If not, we now have Niagara's Fury to simulate it for you.
Posted by Keziah Fenton at 10:26 PM 3 comments:

Random thoughts aren't always as random as they seem

My company is here from Indiana. We're going to Niagara Falls tomorrow to admire Alex's house. It looks so different in the summer than the winter but I still get a great feel for the energy of the place. I've been editing every day and see no reason to stop for guests. Fortunately they're the kind of people who understand that drive. We'll likely discuss scene blocking while at the Falls. I'm blessed with my friends.

We watched Wrath of Gods last night. A couple of people came into the room late in the viewing but were sucked in right away. If you still haven't seen this film about the challenges of making Beowulf and Grendel, hound your local video store to get it or order it yourself. You'll thank me later as I did Zingera and Jon.

Yesterday was such a random thought kind of day while I was prepping for company. My stomach was upset and because you rarely see a chimp running around complaining of such ailments I started to wonder about the diet of chimpanzees and how it differed from humans. Not that I want to eat trees, leaves or small birds but there might be something to the whole fruits and veggie diet. Are chimpanzees actually healthier than humans? This articlediscussed the role diet played in evolution. Genes in the liver changed as radically as the diets the lab mice were fed. It was mostly scientific stuff but my brain went off on a tangent about altering genetics. It wasn't writing related so I left that thought process and went elsewhere.

To Jon Gustafsson's blog as he has some incredible photographs on there. I write a lot from images. While Iceland and Niagara Falls have a huge geographical distance the beauty of both landscapes inspire me.

Once there,I played in a couple of his sidelinks, even though I'm familiar with Wrath of Gods. And ended up right back at my chimp gene thought process. Too bad I don't write thrillers because my brain took the two webpages and ran with them. There were lots of what ifs and why nots and near misses in the evolutionary ladder that would have made my conspiracy driven nephew proud. The funny thing is, I can't really let go of the possibilities.

The study of genetics seems so straight forward but the variables are much bigger than any of us non-scientific folk can imagine. In a strange way, this is the basis of Nea's motivation. Her behaviour is not as much a result of her upbringing as it is her parent's identities. Their genes influence her in almost every way.

Maybe if she ate more fruits, leaves and termites, Nea could change her genetic make-up. But I doubt it. She wouldn't be Nea.

Funny how one thought just leads into another until the end of the day comes and you realize you spent way too much time on other people's blogs, websites and films when you should have been editing your own stuff. Oh well. I enjoyed the strange journey yesterday.
Posted by Keziah Fenton at 5:03 PM No comments:

It's not as exciting to talk about this phase of writing. It's down and dirty, cut and paste, rewrite necessary stuff that isn't all that interesting until it's done. Right now it's simply messy. With a lot of misplaced commas.

Much like my house. I'm sorting through things, re-arranging and preparing a formerly empty room to become a sanctuary. Right now, it's all paint, rollers, cleaning material and piles of stuff. The floor has been laid. All of the materials are there. It's simply a matter of putting things where they belong and discarding what I don't need.

There's no correlation between my life and writing whatsoever. It never ceases to amaze me how often that synchronicity occurs. Does that happen to you?
Posted by Keziah Fenton at 9:46 AM No comments:

For some reason that is unfathomable, and not to be examined too closely should the magic fall off, I can write while watching motorsports. It's an incredibly productive use of my time. The love scenes for some bizarre reason are the best ones I write. Last night, I edited 30 pages while watching the NASCAR race. 30 pages single-spaced.

Today, I rewarded myself with a viewing of the Wrath of Gods DVD that arrived in the mail on Friday. Go order it. I'll wait.

Brilliant isn't it? I didn't even watch all the bonus materials. They'll be future rewards for writing goals that are met. The documentary was fascinating - like watching a train wreck without the gore. It's a testament to persistence, perseverance and dedication. It's also a love letter to film making.

My dad was in Iceland several times with the air force when I was growing up. I've heard stories about its stark beauty and incredible weather but nothing prepared me for the fury of the Icelandic Sea as it rose up to grab a jeep. Or the contrast between sunny skies one day and hurricane force winds the next. Wind and sea fill my mind even now. I wonder if the cast and crew ever did dry out.

Wrath of Gods is absolutely brilliant. Thanks Zingera for recommending it so highly. A bigger thanks to Jon Gustafsson for not only ensuring I received a copy but for making the film in the first place.

Go reward yourself with Wrath of Gods. You won't be sorry.
Posted by Keziah Fenton at 10:58 PM 2 comments: