Sorry I've been absent. My dad passed out last weekend, hit his head and needed stitches.  The ER doctor thought passing out while reading a book was out so he ordered tests. It turns out Dad’s heart stopped so they kept him until they could put in a pacemaker.

Yep, it was a rough week but honestly,  it went as well as something like that could go. He wasn't alone, he was treated right away and the procedure went well.  It's amazing that sticking wires in a heart is commonplace and no big deal these days.

Last year's daily good things helped me get through this week. There were many blessings,  helpful people and support. We had some good laughs, everyone is in good spirits and incredibly grateful. Mom and I found a really good routine. The dogs were confused a bit but liked all the extra attention.

The Littles came by the other night and filled the house with laughter and hugs. The Leafs won, twice. We're all back under the same roof and healthier than can be expected.  Even if it's not what we expected, life is good.
Posted by Keziah Fenton at 10:02 PM No comments:

I'm making sweater boots for my nieces.  We haven't seen each other in a few weeks so not much progress has been made on that front.  I need their little feet in front of me.

We did cut the sleeves off their sweaters so I looked at them and thought - vests! 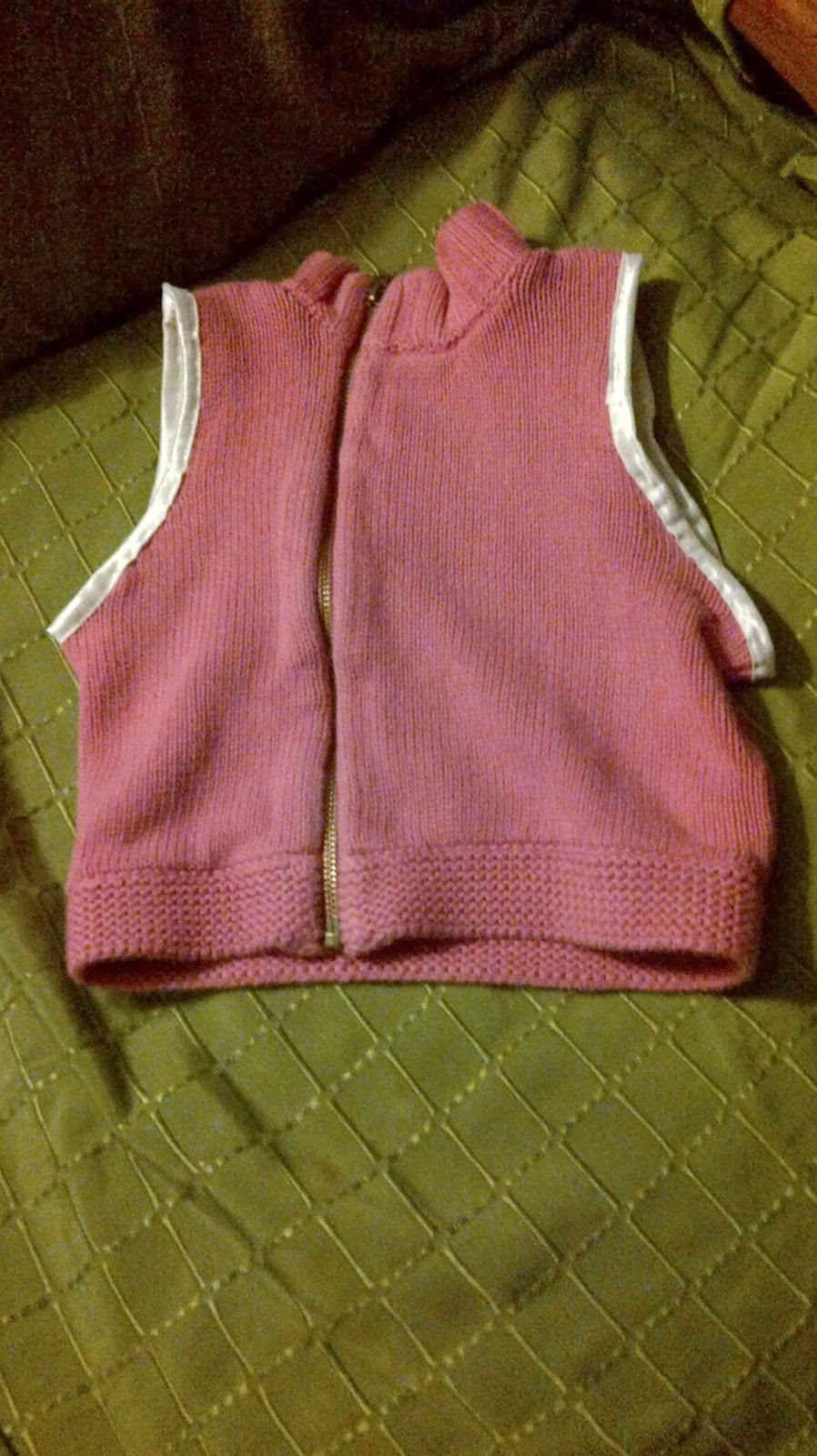 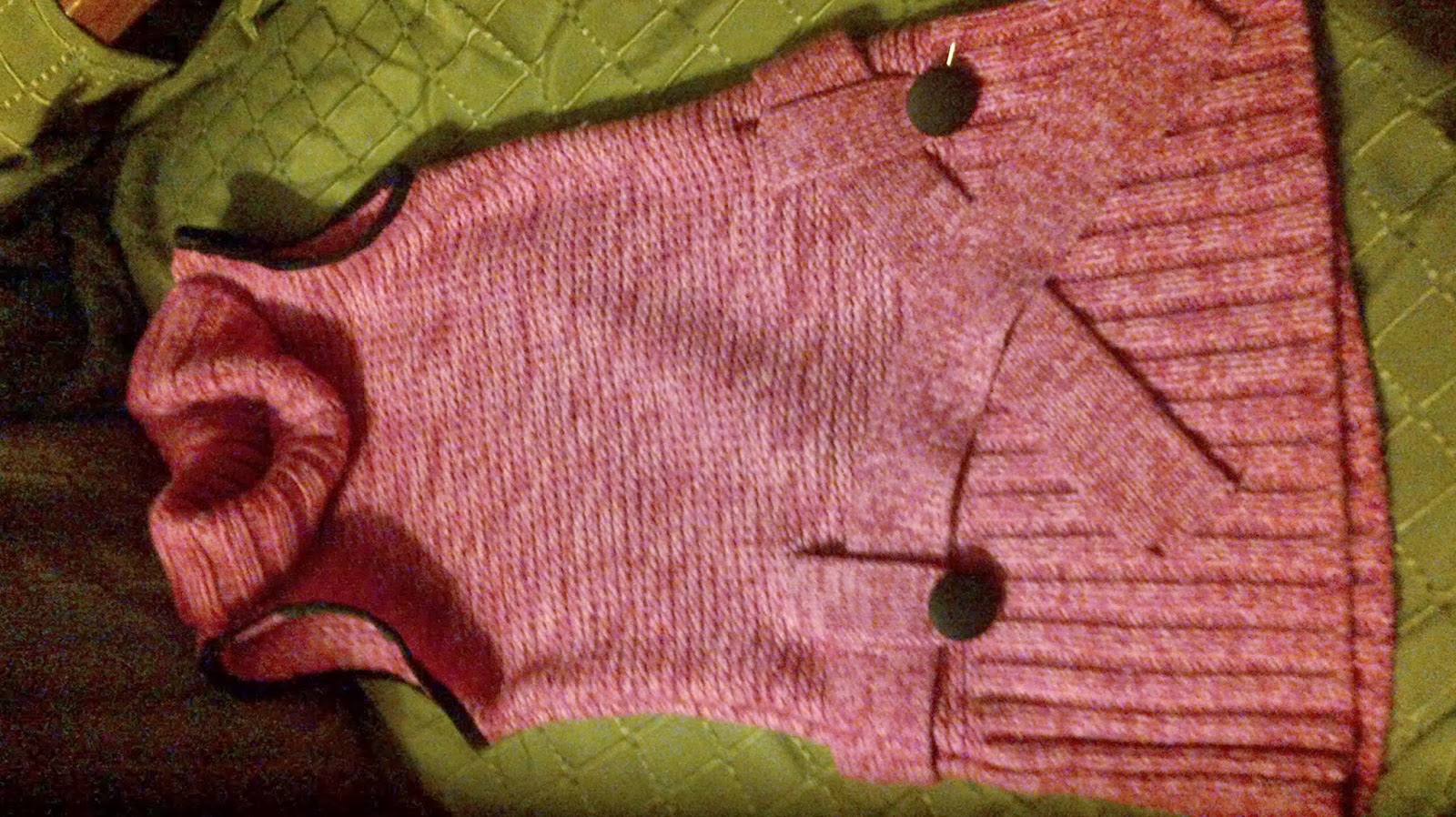 Posted by Keziah Fenton at 8:37 PM No comments:

I've been pretty sick the past week, not thinking in complete sentences.  The good news is I dropped a couple of pounds. I couldn't find the belt the nipped in my top so I used a pin. It actually looked pretty good, all the drape and flow was flattering.

My Dav Rain boots arrived two days after I ordered them online. I loved them! But they were tight so I ordered the next size up. They arrived yesterday. Too big.  I walked around the house in them for hours debating whether to keep them. Too big means heavier socks in the winter.  However, they hit me right in the back of the knee so sitting down with them on wasn't a real option. Holy smokes were they warm. I didn't need heavier socks. I was wearing knee highs.  Other than bare skin I couldn't get much cooler. I decided to suck in the massive disappointment and return both pairs. The nine were too small and the ten too big.  This is why I don't like ordering things online.
Honestly, these are beautiful boots. Beautiful. And comfortable, stylish and versatile.  They were everything I was looking for in a boot.  Well worth every penny - if only they'd fit.  I'm going to spend some time perusing the website and see if there's any other style that might work better. I might give these a try.

Lions have always been important to me. Not only as icons and symbols of strength, teamwork and majesty but as very real individuals.  Odd, when you consider I've been allergic to cats as long as I can remember.

Twenty years ago this Fall, I had the opportunity to get to know a brother and sister lion pair up close and personal.  While he was fond of shoes, would slip them off your foot carefully with a gentle touch, his sister never hesitated to swat any and all passersby.  They were pet lions who worked occasionally in a magician's act.  They were big babies, weighing in at 280 pounds.  When the brother jumped up to slam both paws on my shoulders he dislocated one.  He never meant to hurt me. His size and enthusiasm did it.  Imagine your housecat when he's racing around the house chasing shadows.  Add in the extra weight and height and you have unplanned injury.

It's why I'm conflicted about videos like this.  Lions are dangerous.  They are wild animals. But then so are domesticated house cats.  And dogs. We tend to anthromoporphize them.  I truly believe they have souls and personalities as individual as humans. But they are not human. What makes sense to them, what makes them lion/dog/cat/parrot is different from what makes us human. Forgetting that, or even denying them their wildness, causes problems.  We expect them to conform to our rules, to fit into our lives, often at the cost of their own.

I have no doubt of the strength of the bond between this man and the lions. None at all. I've experienced it to a lesser degree. It is incredible.  Watching him rub their bellies reminded me so much of the feel of lion fur, the sound of purrs, as I brushed out their shaggy coats.  Some nights I would sit on a bale of hay and read Diana Gabaldon's Voyager to them while the male lion chewed on my shoe. The lioness always listened and watched me carefully.  I'm not sure how if she was contemplating time travel or just liked my voice.

There was nothing like waking up to the sound of a lion moaning, a mournful sound.  They were terrified of the chew toy yet batted my window air conditioner around like nerf ball. I miss them every day but know they didn't deserve their life in captivity.  There was only so much I could to to make it interesting when they weren't mine. Releasing them back into the wild was hardly an option here.

To this day, I associate that time with a burst of creativity. They kept me on my toes as I did my best to entertain them. I wrote every day of their four months in my care.  I read aloud to them in the evenings then researched as much as possible.

When the lioness was off for a vet trip alone, her brother broke out of his cage and ran amok in the garage.  He knocked over a bucket of paint, decorating our walls and floor with giant pink prints.  I wrote a note on the door warning his owners that he was loose.  A note that was more haiku that rebuke.

Lions. Dangerous and enthralling. Affectionate and endangered.  Protecting their habitat is as important as expanding ours.

The temperature was so cold here the other day that the boots cracked. I've reverted them to the purple vinyl and am ordering a gorgeous, durable pair of rain boots online. I saw the perfect pair when shopping in Toronto a couple of weeks ago.  Too bad they didn't have my size as the sale price is considerably less than it's-no-longer-Boxing-Week regular price.

It takes a special kind of creative to walk across the floor of the library and pop your sacrum.  Freaking painful too. I had to get creative about lying on the floor at home to watch the hockey game while reading a book. The game was horrid. The book was fun. Kristan Higgins' The Perfect Match.  It was a good break from all the suspense and horror I've been reading lately.

I needed to stretch my back last night. Sitting is painful, standing and walking less so.  I walked slow shuffling steps on the spot while knitting a sock. My family has gotten used to my odd behaviour. Nothing much fazes them.

An interesting note. While it's only been six days since I stopped daily posts, I find I'm still thinking of at least one good thing a day.  Today's is remarkably easy.  Unlike most of North America, including cities within twenty minutes of us in all directions, we have power, little snow and the sun is shining. Temperatures are dropping like a stone but we're in a sweet spot, weather-wise.

My rubber boots are wonderful. I can jump into them easily. Sadly, they've split at the ankle so I need new ones. I saw the perfect pair the other day when we were in Toronto but they only had a size two larger than I normally wear. Apparently, that's the size I take in that brand. Oh well. I'll order them online as none of our local shops carry them.

Snow is piling up today and I wore all three pairs of boots I currently own. Only because every time I went out the previous pair were still wet and my socks were not.

While I was out boot shopping, I came up with a temporary solution for my rubber boots. While I really like the purple, I couldn't find anything in that colour that would work as a repair. 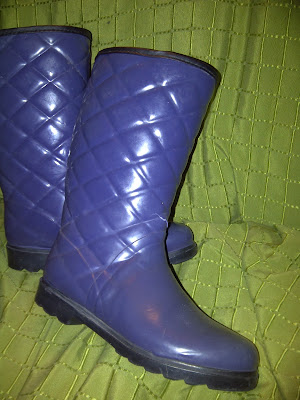 I bought some plastic shelf paper and covered the boots.  I've already tested them in the snow when I ran out to empty the garbage.    Eliot thinks they're cozy (truth is that's Eliot's spot and nothing, absolutely nothing is going to keep him from it) 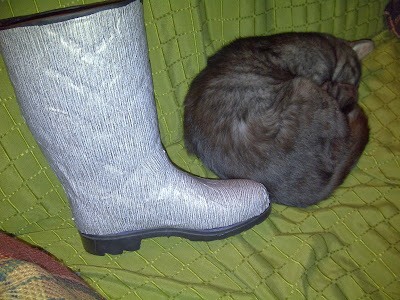 Not bad for a creative solution.  What do you think?
Posted by Keziah Fenton at 11:18 PM 2 comments:

Last night at dinner I did a much better job of articulating what the past year of Good Things has meant to me than I wrote on the blog. Let's pretend you were all sitting at the table and heard my concise explanation.

If 2013 ended up being the Year of Balance, what does 2014 have in store for me? What will be the focus of this blog?  I've been thinking about it a lot for the last few months.

Should it be about sources of inspiration?  Things that fill me with pride? Being accountable for personal goals?  Do I stick with daily posts?

I'm not sure.  I considered posting a photo a day that best summed it up. My grandfather was a good photographer.  I still have the telephoto lens he gave me in my first year of college. I still have that camera.  Film m is hard to find these days. Getting it developed even more difficult.  While I like the ease and convenience of digital,  I don't think I compose as well now that I can't afford to waste a shot.

I'd like 2014 to be the Year of Creativity. Whether it's crafting a fine piece of writing, knitting up a warm pair of socks, shooting a glorious sunset or problem solving with a patron, I intend to be creative, to approach things from an angle that only I can reach, to share a perspective that comes from my vision.

No matter my mood, my expression will be creative and stretch me into areas of growth. I hope you share the journey with me.