I had an interesting conversation with someone the other day about meeting famous people. She's thinking of taking to the streets of Toronto for the Toronto International Film Festival because she's never met a famous person.  I don't understand wanting to meet someone based solely on their celebrity.

My grandfather was the head of PR for the CNE so celebrity doesn't have the same meaning for our family.  Because we've been exposed to interesting people who are famous for one thing or another, we quickly learned that what makes people fascinating is personality and behaviour as opposed to persona and fame.

There are several famous people I'd like to meet. I've seen them in documentaries or on talk shows and been intrigued by their experiences or perceptions.  I want to talk with them about those things. Last night, I dreamt that Robin Williams, Dennis Quaid, Nancy Herkness and I were talking about raising kids. We were a group of people united by our frustrations, pride and love for the children in our lives.  It was a good conversation (and entirely imaginary but I blame the actual conversation that started this blog)

Somehow, I doubt that will happen by standing behind a rope to watch someone walk down a red carpet.

How do you feel about fame?
Posted by Keziah Fenton at 11:19 AM No comments:


My little world is more chaotic than usual. I write to comfort myself. And I read a lot. Right now, fairy tales with a twist are very popular in the young adult market. That makes sense to me.

Oh, how I long to escape back into the world of fantasy that I alone create. I miss writing. House repairs were done today - until I had the first shower in my own bathroom in over ten days. It leaked. Just a tiny puddle at the corner by the tub but it came from behind the tub surround. ACK!

I haven't finished the quilt, been busy with the bathroom repair which had segued to the living room floor as we used the laminate from the middle of the living room. The varnish nearly killed me but didn't bother the birds. I protected them much better than I did myself.

Now the shower leaks. Again. We were so sure we'd got it. Nothing leaked before we reinstalled everything. It has to be the showerhead.

I'm anxious to return to the suburbs of North Carolina so that Nymphs can battle each other. I control all the variables there and rarely, not never, but rarely, does something happen in that world that takes me by surprise.

Closing Ceremonies of London 2012 are over. I feel bereft. 17 days of believing in the best of sport, and the best of humanity. Someday, we'll hold onto that energy longer.

I didn't finish the quilt. I was derailed by emergency bathroom renovations. I had a couple of bad days feeling sorry for myself. Olympic athletes put that back into perspective. No matter how disappointing their day, or their finish, they pick themselves back up and complete their task.

Think of my quilt as a marathon. I may finish last but I will finish.

And once the floors are replaced, I will return to writing. During the Beijing Olympics, we had a Writing Olympics. Many words were written, pages turned in. Maybe that could be my paralympic gold.

What about you? Are you going to continue to enjoy London 2012 and cheer on the para-athletes?
Posted by Keziah Fenton at 7:52 PM 1 comment:

My great-grandmother was a milner. She loved fabric and thread, and was brilliant at creating the most wonderful hats that suited each woman perfectly. Last year's hoopla over the Royal Wedding would have filled her with glee. I'm sure her fingers would have itched to be part of that. I've barely worn a hat since she died when I was in my mid-twenties. She was 105 and sharp as a tack for the first 100 years.

Mumma raised my mother when the latter was a teenager. That's a delicate and difficult age and massive kudos to a woman in her seventies taking on such a task. Fortunately, the two had a lot in common and the tough times were minimal. During that time, Mumma taught my mom to quilt.

Fast forward to my own difficult teenage years. My mom hauled out a box of fabric from her grandmother and taught me how to piece them together. Mumma donated a quilt of butterfly applique that she'd never finished towards my education. It was an Olympic year so we set up the quilting frame in the living room and kept busy while we watched Nadia Comaneci, Bruce Jenner and Canada's own Greg Joy. For the next few years, I sewed, embroidered and quilted through the confusing times.

I'm not sure why exactly. I know that's about the time I started knitting. I was older and my interests were more outside of the house. I was busy exploring the world.

Last year, I inherited bolts and bolts and remnants of fabric from my friend and her mother. I recognized some of the scraps from different projects but a lot of it was brand new and never been cut. I knew right then what I would do with it all. Well, as much as I could manage.

Part of the challenge lay in the fact that I'd never learned to use a sewing machine. No matter how often my mom walked me through it, it was something I simply couldn't grasp. All of that material had to be hand-sewn. I recruited a friend to help with some of it. She took half the material to cut and machine sew. I took the other half and stared at it for several months.

Then the Olympic ads started. My mom came home from the hospital and helped me organize the fabric into weights, colours and themes. My goal was to get the project pieced together in time to quilt during the Olympics.

I put it on the hoop the night before the Opening Ceremonies. Every day while I watch Michael Phelps, Gabby Douglas and the Canadian women's soccer team, I quilt. I've been posting the daily progress on my Facebook page which caused my aunt to remind me of my great-grandmother who started it all.

My mom is back in hospital. My friend is gone. My great-grandmother long gone. But the threads they have woven in my life are as strong as the thread that pulls three layers of fabric sturdy and true. 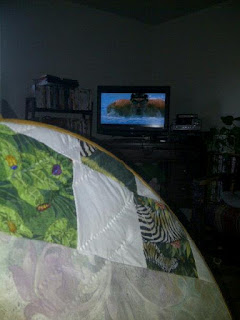