2019 kicked my ass to the curb. However, I remain undaunted, and committed to writing. I've discovered that the best way to survive a crisis is write through it. Some people consider that akin to burying one's head in the sand. I considered it self-care.

It doesn't always amount to a story or novel but self-care writing allows me the time to process and consider my options regarding said crisis. It occasionally also results in a well turned phrase or a creative way to call someone a self-serving, inconsiderate, piece of flea dung festering inside the hindquarters of a flatulent camel.

Typing for any amount of time makes my wrist swell and sing of its woes in a high-pitched squeal. I carry a notebook with me at all times - and a pencil because ink dries up if a pen is not often used. I found an app that scans pen to print. I still have to transcribe it eventually. Then I found Otter. It does an excellent job of transcribing vocal notes. I read back what I've written then insert it into the manuscript. That discovery led to a renewed zest for book two in the hockey series. Sometimes, it really is the simple things.
Posted by Keziah Fenton at 9:32 PM No comments:

I broke my wrist a few months ago and am still in physical therapy for it. All that spare time resulted in more than a few plotting problems working their way out of my head and onto the page. I've been filling up notebooks. Typing is still painful. I reserve the bulk of my energy for work.

I'm not sure if sitting down months ago to put words on the page would have resulted in strong solutions or if the writing would have led to a lot of false starts. It certainly felt like the latter when I was doing it.

I've always maintained that we are writers, regardless of word count. The most mundane of tasks can result in some productive writing days. Showering and driving have both been good spaces for me to figure out plot holes.

I did a lot of reading on my tablet in my convalescence. "They" tell us to read constantly; that it makes us stronger writers. I usually avoid my genre of choice while I'm writing it so that I don't accidentally mimic someone else's style or story. Because I thought I was never going to get back to writing ( I can catastrophize with the best of them) I pick up a couple of good hockey romances.

Stephanie Julian writes hot, steamy hockey players. It's a wonder these men can excel at their sport when they're hot enough to melt the ice around them. Stephanie knows her hockey and it shows. I may have re-read The Brickwall, the first in her Redtails Hockey series, a couple of times.

I also spent some time getting to know the South Carolina Stingrays. My friends are season ticket holders and I usually catch an event when I visit. It seems disloyal to follow them more than my local team but I'm always working when our guys play. Thank the gods for the NHL and their long season.

To recap: writing is happening again. Thanks to my injury and subsequent physio, I have given my hero an epic injury that may, or may not, sideline his career forever. I'm writing with a lot more confidence. It's fun now that I've repaired the plot holes.

How are things with you?

Posted by Keziah Fenton at 8:20 PM No comments:

Sorry for the hiatus. Life has been challenging in the last couple of years. I'm hoping the blog will get me back to who and what I love - me writing.

We sold our house, packed it up and moved to a  heritage mansion two blocks from the Niagara River. I can stand out on the porch and hear the roar of the Falls, a sound that has always soothed my soul, and one I've desperately needed.

Our first summer here was magnificent. Mom had a freedom and mobility on the half acre property that she never had in town. We had barbecues and bonfires, walks down to the river, and so much laughter. It was the happiest any of us had been in a long time. Everything was fun.

Then it ended. Mom fell and broke her leg, developed pneumonia, and died our first winter. That Christmas and the following few months are a blur. Dad and I take solace in the memories we made that year.

The following Spring, I registered for online courses through a nearby college to get another diploma. This one ensures I can be promoted when my coworker retires. As my boss suggested it, I feel good about it. The bonus is that it's making me better at the job I currently do.

That's about the time Ky started having trouble with dementia. He was fourteen and completely deaf. Casey and Finnegan did a great job of keeping him aware of his surroundings but whenever Ky got out of the yard, he usually strolled down to the Buddhist Temple down the street. I don't blame him. It is a remarkably calm place to be. We limped through the summer together. About two weeks after I lost a good friend in a tragic motorcycle accident, I had to let Ky go. My heart is still broken.

It's 2019 now. School is going well. We've all adjusted to our new dynamic with giant holes where Mom and Ky should be. We miss them terribly but Mom would definitely kick our asses for wallowing too long. She visits us in our dreams a lot. Sometimes she has Ky with her.

My goal is to get back to writing. I have two assignments due on Monday. There is no reason (other than a crippling lack of faith in my own abilities) that I can't write for an hour every day. I promised my critique partners I would have something to share with them by the end of this week.

I figure between them and this blog, the need for accountability will keep my nose to the grindstone, no matter how painful that idiom sounds.

See you soon -ish.
Posted by Keziah Fenton at 5:11 PM No comments:

Apparently, Canadians say certain words with a funny accent. It's disconcerting to tell a story and lose the train of thought because everyone is doubled over laughing at your word choices. It was all in good fun with no maliciousness but it did make me hyper-conscious of words.

As a result, I took my time speaking and worked around trigger words (out, about, neighbour and colour even though the u is silent in the latter two). My awareness expanded. I realized how lazy we've become in our speech. We rely on the same group of words and patterns in our everyday speech. Text speak has invaded our vocalizations. I embarrassed to admit I actually said LOL instead of laughing the one day.

Language is fluid. It grows, changes and corrects course all the time. Even churches are moving away from Latin in an effort to reach younger parishioners. It's natural to resist the changes if you're from an older generation and eager to embrace them if you're younger.

In the meantime,I'll take my Canadian accent outside to walk about the neighbourhood.
Posted by Keziah Fenton at 2:38 PM 5 comments:

I bought my original pair of DAV rain boots in 2014. I wear them Autumn, Winter and Spring pretty much exclusively. They owe me NOTHING! I love them I have the Bristol solid black but there are so many cute, practical, styles from which to choose.  Go shop. They are comfortable, fun and versatile.

Their customer service is beyond excellent. I mentioned on a Facebook forum that mine leaked. I received an email and credit from the co-founder of the company for a replacement pair. They have never heard of Bristol boots leaking.Considering how hard I am on footwear, I'm surprised they lasted three years!

Plus, they look great with a pair of tights and a tunic. 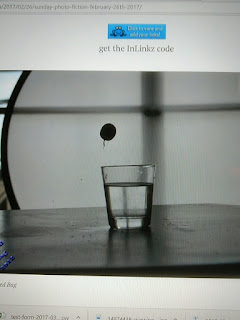 Instinct took over the instant the glass slammed on to the table with enough force to dispel the olive from the martini.

"Run Henry, run!" Sylvie grabbed her younger brother and half dragged him out the front door.

"No." He resisted her efforts and dug in his heels.

Their father lumbered to his feet and beat them to the porch edge. "Wait!!"

"Sylvie!" Both of the males in her life impeded her flight.

Henry slipped around in front of her to restrain her with two hands on her arms. "It's okay, Sylvie."

She shook her head. It wasn't okay. It would never be okay. The rancid scent of fear filled her nostrils

"Sylvie." Her father settled his weight on the top step, effectively blocking her path. Henry enfolded her in his arms and slowly lowered the two of them to the porch floor. "It's okay."

Feeling and sense slowly returned to her limbs as Henry gently stroked her hair and whispered assurances.

"She's gone." Her father placed a tentative hand upon Sylvie's foot. The familiar gesture cut across the terror and years. "She can't hurt any of us now."

"That's my girl." Her dad offered a bittersweet smile.

"How long did it last this time?" She shoved her hand through her hair, amazed as always to see white streaks in the long blonde strands.

Henry smoothed his hands down her arms then set her away from him. "Just a minute. Dad knocked his glass to the floor. Ice cubes went everywhere and you bolted."

Her father patted her foot. "No one got hurt."

She searched her brother's gaze for any contradiction. "Dad's right. No one got hurt. You shut down right away."

Sylvie shuddered. It had been years, decades really, since she'd withdrawn so deep into a memory. Therapy and a wide variety of coping mechanisms made all the difference.

But the sound of smashing glass never failed to strike her numb with terror.

She traced the ropy scars on Henry's forearm and hands. Her kind, gentle brother was the bravest man she'd ever known. The first time she'd lost herself in the rush of traumatic memories she'd knocked over a candle and set her dress on fire.

Henry had reached into the flames and saved her.

As he'd continued to save her from danger, both real and remembered, ever since.
Posted by Keziah Fenton at 8:00 AM 1 comment:

A friend called me for animal advice this morning. I have a lot of contacts in health, behaviour and rescue. Over the course of the conversation,  she commented on my ability to find the good in any situation.

That's how I cope. I find the silver linings in clouds. That can be as simple as the unusual shape or colour of the cloud. I'm not immune to the fact that there's a severe thunderstorm raging all around me. Instead, I focus on the safety of our shelter,  the electric charge in the air, the way people gather together to share resources.

I've felt unbearably sad today for no discernable reason. The weather was sunny and warm so I played outside with the dogs. I finished reading a good book out in the fresh air. I drove with the car windows down.

And I helped my friend brainstorm a solution to her animal problem.

At the end of the day, helping someone else is a good way to help yourself.
Posted by Keziah Fenton at 10:53 PM 1 comment: