I always wanted a baby elephant... 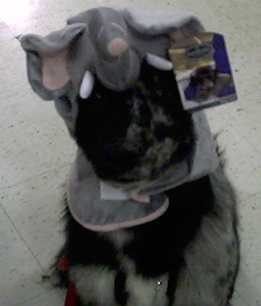 this was the best Ky the long-suffering dog could do about that.  He was just a baby at the time
Posted by Keziah Fenton at 5:51 PM 3 comments:

Oops.  I was busy making memories with my darling niece this weekend and forgot all about the time.

Can you guess what this is a  picture of? 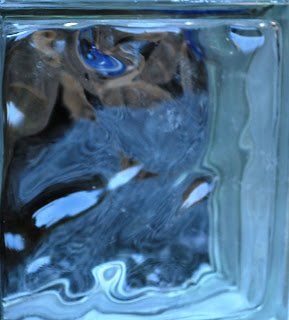 It's a glass construction block. You could build an entryway, counter or patio with them.  My nephew was selling some for us on kijiji and needed a good picture. Then I started playing with them to make some interesting effects. We didn't sell a single one but I had fun.
Posted by Keziah Fenton at 4:02 PM No comments:

A great deal of fiction (The Stand, Lord of the Flies, The Experiment, Survivor) purport that in the face of catastrophy or bare bones survival, man will turn on himself until only one remains.

I think the 33 men stuck in the Chilean mine for 69 days proved that all wrong. Not only did they work together to ensure the group's survival but they surpassed their individual abilities to emerge triumphant in spirit as well as body.  Apparently, they've hired an accountant to create a fund in which to place the profits from the telling of their experiences so that each man, from the quietest to the most exuberant, will share the wealth.

Take that William Golding.
Posted by Keziah Fenton at 11:35 AM 3 comments:

A few posts ago I mentioned watercolours and Miz Elen said they were one of her favourite art expressions.  Go look at her header then come back and compare it to this splash I created twenty years ago. 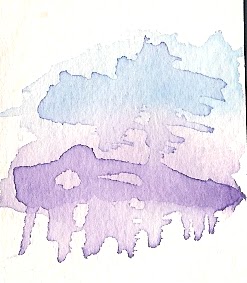 They're not exactly the twins I thought they were but it's hardly a surprise we're drawn to similar looks.  Just as Stashaholic mentioned she was researching e-Readers at the same time as I wrote a blog about them, these coincidences can only mean one thing. We are attracted to people through common interests. Admittedly, I didn't know Elen liked Motown and watercolours when we first began our interaction but as the friendship has developed we've introduced each other to new things (Mad Men) as well as sharing others (MI5). The more you get to know someone, the more you learn you have in common.

I'm going to try applying that homily to random strangers who pique my interest.  I wonder if instant attraction can be attributed to a deeper understanding of individuals that is intuited on a cellular level...

Sitting down behind the wheel can be very therapeutic and meditative. It can also be frustrating as hell when you fight the fibre. That's easy enough to do when the brain cells are spinning faster than the wheel.  Still, there's something about the shape and wood together that always makes me smile. 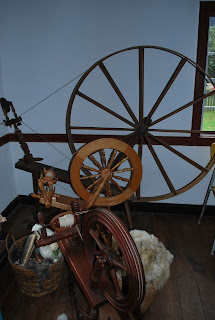 I came across these three lovelies at the Pioneer festivities yesterday.  They were tucked into the corner, almost an afterthought while hand-painted glasses and dried flowers had bigger displays. That's okay.  Spinning isn't for everyone.

For those who do enjoy working with fibre and yarn, I'm happy to say The Fibre Garden celebrated their first anniversary.  Stashaholic and I are doing our best to keep them in business for many years to come. 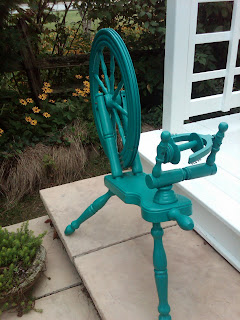 Posted by Keziah Fenton at 1:02 PM No comments: