Train bridge aka Not my best title

Some friends were just talking about household repairs and the lengths some vendors will go to in order to move equipment.  It made me think about all the times that we're so focused on one route that we cannot see the others.  So I wrote "Sometimes it's better to get off the tracks rather than try to out-run the train".

That made me think about my writing. Over the years I've become more flexible about changing genders or characters to better suit the story. I've re-written plots because characters solved the entire issue on page three (sometimes they are much smarter than I am).  I've changed titles repeatedly to get the exact sense in three words or less.  As a writer I am considerably more flexible than I am as a person. Mind you, that took a lot of time. My critique partners will tell you I clung to my ideas even when the entire group thought I'd gone off in the wrong direction.  My paths are rarely direct.  In writing or life.

As a business person, I know nothing. My instinct tells me one thing but my experience is the opposite.  I have enlisted the advice and guidance of business people from other fields. My former accountant thought writing was an absolute waste of my time from a financial point of view. That opinion has been repeated by everyone I've consulted. None of their opinion has anything to do with my writing quality but everything to do with the competition and business model for publishing.  Indie or self-publishing has made the above both better and worse. There are a lot more options for the writer to take control of their career.  No one I've talked to who is doing it is able to support themselves financially from writing alone.

I have a good job doing something I love. I also love writing. I jumped off the tracks for two years and didn't write much. I definitely didn't pursue it as a career.  But the manuscripts have stacked up.  Their stories want to be heard.  So I'm running down the track again.  The train behind me is gaining speed.  Fortunately, there is a bump out alongside the track, a safe place to stand when the train barrels past.

I'm going to stand there and read up on more options. I'm sure another train will  be along any minute if I want to run in front of it. Or I could wait until the track is quiet and sprint down the bridge then.

If you're not sure where I mean, look straight above the left swan's head and you'll see the little cut-out on the top of the train bridge. 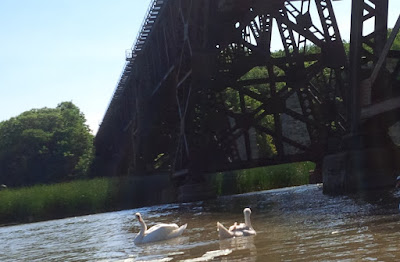 When is a kiss sexual assault?

I primarily write romance. It may have some paranormal elements to it but at the end of the day it is a romance that ends on a happy note.

When my characters meet they are invariably strangers.  Their first kiss is monumental. It is part of both character and plot.  It rarely follows the "Can I kiss you?" scenario.  They read each other's signals.

Then I read this article about a reporter who was kissed on-air by a strange man.  Full disclosure, the author of the article, Michael Hollett, is my cousin, not that our relationship has any bearing on the discussion.  I am aware of the backlash he encountered because he posted about it on Facebook. Michael has always stood behind his beliefs, solidly and without wavering. I know that because we're family and it's been a part of his personality from before I was born.

All the family stuff aside, the article, and Michael's stance, made me think about how easy it is to justify assault through non-verbal cues.  I read far more romance than I write. I interact with human beings every day at work and at home. I've been witness to, and experienced, sexual assault. In most of the cases I can personally attest to, both literary and actual, the aggressor "mis-read" the victim's body language. In a lot of cases, they didn't care.

Is the skin flushed from fear or arousal? Are the eyes dilated from apprehension or pleasure? Is the breathing ragged from panic or anticipation?  Those are the cues we use to determine whether our physical attention is wanted.  It is so easy to read those signals based on our own desires and expectations.

Honestly, I've never considered the first kiss scene where the hero, or heroine, suddenly presses their lips against the heroine's, or hero's, lips to be sexual assault. You know going into the story that these people are going to meet, fall in love, triumph over conflict and live happily ever after. In real life, that is most definitely not the case.

Are romance novels at fault for that mis-communication? Not any more than video games are responsible for the increase in gun crimes at movie theatres.  There are correlations but most of us know the difference between reality and fiction.

Still, I've given the kiss as sexual assault a lot of thought.  A lot of thought. Just because we never viewed something a specific way before doesn't mean we shouldn't start.

Posted by Keziah Fenton at 1:09 PM No comments:

Random thoughts because it's a Wednesday

I have a notebook full of story ideas and half scenes.  Anything on television from news to game shows is fodder for story.  I had a brilliant idea the other day based on a science show my nephew and I were watching. We discussed it briefly but I failed to write it down.  I asked him about it yesterday.  His response, "You said what if something like that was really true and the thing did another thing and that happened." Really?  "Yes. It was a good idea." Except neither one of us remembers anything specific.

Notebooks. They can save you from hours of speculation that never leads anywhere.

Or maybe it was just the idea that people thought their house was haunted because things went missing or reappeared in the wrong places.  Turns out it's just a cat. No real twist to anyone who has ever shared space with a cat. They're brutal for stealing items and hiding them. I lived with a crow who was tidier than a cat. Crows store all their treasure in their nest, not beneath the fridge or inside your shoe. And why on earth do they think a shoe is excellent cache for a mouse.  We use those shoes every day.

My mind makes weird connections. I might just write a story that puts several of them together. But first the pseudonym.  And remembering the idea where the news was true and the thing did another thing and that happened. Then the parrot laughed. Because he knows how foolish human brains can be.
Posted by Keziah Fenton at 4:39 PM 2 comments:

Greetings, my friends.  The trilogy has a name - The Tiger's Eye series. Yes, series. Because while brainstorming the three books I kept coming back to one character from the third in the trilogy that was never planned. The first was a standalone.  Then a character caught my attention. Then another one. And now a fourth. She got short-thrift in the third book and the goddess noticed. So she issued a challenge that the shy character is going to have to steel her spine in order to meet.

I have to finish two origin stories first. One for a secret project (who knew I could keep a secret?) and one for the horror story. It's the epilogue that shows how the painting became so disturbing.  Because the final scene was so horrific, I have to make the creation scene compelling but also equally intense.  The research has been too much for me to stomach so my nephew approached a neighbour who is also a hunter.  It's always good to have help.

I need a pseudonym for the horror story.  It's not like anything else I write.  I don't want to confuse readers who are used to the voice you read over here.  DNe suggested I look at contemporaries of Edgar Allen Poe and see what tweaks my creative radar.  Of course, I immediately thought of Raven. It's a good name. It's not creepy though the poem is suspenseful.

What really holds me back though is an excellent short story writer I follow on Twitter - Jesse Raven  His writing style is so tight and suspenseful.  I look forward to his upcoming compilation.  Go check out his website. You'll see why I need a different name. Ravens may flock together but one usually stands out and Jesse is it.

So the search for pseudonym continues.  I could possibly keep one half of Keziah Fenton. I'm not sure which half.  It's a quest. I love those.

What says horror name to you?  Remember, Stephen King is already taken.
Posted by Keziah Fenton at 3:43 PM 4 comments: