In the more than five years I've known him, he's been a walking encyclopedia about Motown.  From its biggest stars to more modest songwriter, Carlo can tell you who's who and why we should know them.

It's great fun to work with Carlo.  We both have the 25th anniversary of Motown album. Mine's on vinyl and I bought it when it first came out.  We both have Mary Wilson's autobiograpy Dreamgirl:My life as a Supreme. His is autographed.

A couple of weeks ago, we went to see Smokey Robinson in concert.  Smokey's voice has only gained in strength and range over the years. He's added to his songlist, both as a singer and songwriter. He pulled off contemporary pieces that put the original artists to shame. I was deeply moved by his version of "Don't know why."


Watching Carlo at the concert though was its own experience.  He was in his element. Element.  There was nothing awkward or strange about his connection to the music or to the performer.  I felt like I was seeing Carlo where he not only belonged, but thrived.

He's the poster boy for reincarnation.

His knowledge of Motown is well-known and recognized by other fans, most of them two to three times his age. When Mary Wilson was looking for someone to manage her website, she was given Carlo's name.  He wasn't a complete unknown to her. She'd been looking for specific photographs several years ago, and Carlo had helped her find exactly what she was looking for. He took it out of his own collection.

I tell you all this,not only because I adore Carlo, but also because as writers it's all too easy to fall into stereotype.  We hope our characters don't become two dimensional or cliche but we rarely look beneath the exterior to see what makes them truly unique. Not only is a Carlo a thoughtful, generous young man, his soul vibrates with the music of another time.  Yet he's fully engaged in the here and now.He's found a way to make his passion contemporary.

Carlo is the webmaster for Mary Wilson.
Posted by Keziah Fenton at 9:47 AM 3 comments:

We have a bad habit in this household of misjudging time.

We thought it would take a day or two to lay the sod and paving stones for the sidewalk. It took a total of six days spread out over three weeks.

We thought it would take months to adjust to all living together and it only took several weeks. I suspect it helps that we have separate apartments and can get away from each other.

We thought it would take a month or two (ok, only Mom was that optimistic) to heal Casey's leg. It's been 16 months and he's still in a brace.  He's running around like a fool, chasing Ky, leaping for the ball and generally acting like a normal dog.

About a month ago, we hit a snag.  His foot slid around in the brace. He limped all the time and held his leg up more often than not. We trained him to put his foot on the floor on command but the rest of the time there was a few inches of clearance between paw and ground.  He couldn't seem to put it down unless it was a conscious effort.

I worried that the ligaments or tendons had shortened.  It seemed like we had finally received good news about the strength of his shoulder muscles only to have balanced it with bad elsewhere.  His brace was falling apart. The sole had to be glued on every other night because he scuffed it so much.

During one of his weekly swims, he hopped over to see Janice at Pawsability.  Her initial assessment was that his leg hadn't changed. Once she watched him walk without his brace, something he does with increasing frequency, she realized something important.

After 16 long months, Casey's leg has straightened. It still turns out from his body, due to some weak muscles below his elbow but it's straight. Straight!! 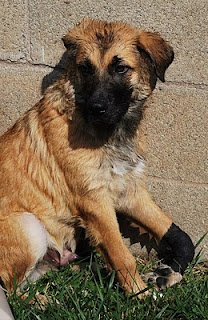 See how his foot is turned completely under. It was like that for a very long time.

This is how Casey looks today 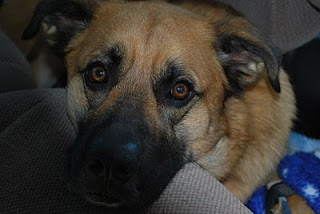 He wants out of the car to swim

Oh wait, you'd like to see his paw.  Apart from the picture above, he's always on the move.  I'd like to have a word with the veterinarian who thinks Casey would be better off with three legs.  How is that even possible?  This dog knows no limits because of his orthotic brace.

But the ultimate proof of how well he's doing now comes from this action photo.  He ran past me through the kitchen. 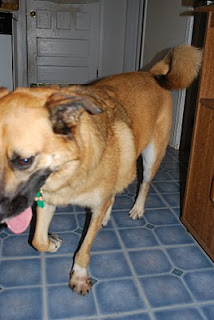 It's a crappy photo but perfect all the same.  Note which paw is taking all of his weight.

You know that old adage, "Be careful what you wish for, you just might get it".  Last week's post was full of activity and commitments and I wished I had more time - for friends, for family, for writing, for gardening, for relaxing, for fun.  I don't know about fun and relaxation but on Monday one Door slammed shut so hard that the house is still reverberating. The aftershocks popped open three windows. They're small windows. I'd have to go through all three simultaneously to get to the same place that door afforded me but it's nice to know I'm not trapped inside without an emergency exit.  I still have the smaller door I've been using all week. All is not lost.

On the upside, I have all that time on my hands. I can finish my courses(once I stop staring aimlessly into space or fighting Ky for the dark chocolate peanut M&Ms that seem to be a primary source of comfort -the chocolate, the dog and the scrambling)  I plan to systematically clean and purge every single room in my house - even the haunted basement that Stasholic and I never got around to exorcising on her last visit.

But first, to finish Casey's book. We've had some positive developments in that area and I'm just waiting for the pictures to come through before I share next week.  I'll take it over door number one every time.
Posted by Keziah Fenton at 12:51 PM 9 comments: