I was driving in rush hour traffic on the DVP in Toronto the other day when a line from The Art of Racing in the Rain came to me. "The hands go where the eyes go." I couldn't remember if the quote was your hands/eyes or the hands/eyes so I looked for the book when I got home. Couldn't find it anywhere. I must have lent it to someone. I loved that book and shared it with everyone who expressed an interest. I work at a library. Lending books is something I do.

My nephew maintains that burning music is the same thing.I'm fairly rigid about copyright law. I don't want my stuff stolen so why would I steal? Karma pretty much rules my life. Burning music and movies is not the same as sharing a book. I've had many a debate with friends and family on the subject of pirating. The word "pirating" doesn't say it all?

In the case of books, either the library or I have bought and paid for those books,CDs and movies. In several cases, we've paid for a special license in order to share them. When you rip a file onto your computer, the artist/publisher/studio wasn't reimbursed for that property. And if everyone pirates and no one pays then the artist/publisher/studio will go bankrupt. In that scenario there are no more books/music/movies. It's a simplified black and white equation. There have been many arguments made for pirating. I just don't buy any of them.

I am constantly amazed at the number of artists/performers/writers who pirate other people's work. I don't understand it. If you really don't want to pay for that article, then go take it out of the library. Don't steal it off the Internet. If you want to share it with someone then tell them where to get it or buy it for them as a gift.

Is pirating different from taping/TiVoing/DVRing your favourite television show? Those shows aren't for sale. Revenue isn't being lost, unless you count the fact that people zip through the commercials. Is the primary difference borrowing versus keeping?

The sale of Intellectual Property, is hotly debated by people far smarter than I. Computers and the Internet make everything so accessible. That doesn't make it right to take. Educate yourself.

Jumping down off today's soapbox. Kinda high. Anyone want to sell a ladder?

After writing the above I went surfing and stumbled across this post that explained it all from an author's perspective. Piracy sunk a series.
Posted by Keziah Fenton at 1:03 PM 4 comments:

One of the things this week has reminded me of is the fact that the more frequently you write, the more productive you are. Not just because obviously you're increasing your output by sheer persistence but also because you gain momentum.

That said, I've just spent a significant portion of the day outside trying to repair my pond. It's leaking but darned if I can find the source of it. In an effort to see all four sides of the structure, I ripped out some weeds, a giant pumpkin plant that had migrated from who knows where and long vines of honeysuckle that trailed into the pond.

I don't wear gardening gloves. I love the feel of dirt squishing between my fingers and beneath my nails. I like separating roots by feel rather than tugging til they snap. I enjoy the green stain from crushed leaves and the way my skin carries that aroma long past a thorough scrubbing with soap and water. There are disadvantages to that practice.

Today I learned that honeysuckle is stronger than I thought. It sliced across my fingertips and my palm when I tried tugging one tender young vine from the ground. Holy smokes, it was tough. You could make rope out of it. Or use it to garrote someone(I'm reading Jeffrey Deaver novel at the moment). My fingers are screaming at me.

Because I've been in writing mode (diligently making my goal every night before bed, if not sooner) I wondered about other plants and how they could be used as weapons. While Bracken and Bryna have been shoved to the background, I couldn't help but think of the world they inhabit and how they would use the resources at hand. But if the plants are living things, would the H/H sacrifice the vegetation to stop their enemy?

Shoot. I did not want to get sucked into their story. I've been doing great this week with Casey's. But I love when one unrelated activity leads me back to writing.
Posted by Keziah Fenton at 4:45 PM No comments:

I just spent a great twenty-four hours with my friend Elen. We talked about writing, drank wine, ate real stovetop popcorn and brainstormed. One of the things I enjoy most about her company is Elen's word choices. She used reciprocity in a sentence in such a way that I rolled that word around in my head all morning long. She inspires me to step up my game and stretch my vocabulary. She renews my faith in humanity, in writers, in the industry. She reminds me that writers are some of the most prolific readers as well and that if we can entertain each other we're doing well.

I showed her my spindle and Icelandic fleece. We discussed the sweater book in detail as well as the way I'm being pulled in at least three different directions. Elen had some great suggestions for how to deal with that. I'll explore those over the next few days and see how viable they all are.

We also spent a considerable amount of time poring over each other's vacation photos as well as Jon Gustaffson's photography. He's quite talented and should update his website more often. Regardless, his creativity never fails to ignite mine.

All of that combined to send me home with a renewed enthusiasm and purpose for writing. I have several different avenues to explore as well as a concrete plan and some goals.

Maggie Shayne is writing a book in forty days - and blogging about the process. You all know how much I love a writing challenge. She's doing a great job of meeting her daily goal. So I'm going to play along at home. From now until Maggie reaches her goal, I'm going to write, or edit, five pages a day. Once in a writing regimen, it will be easier to stay on track.

It begins tomorrow. Anyone else want to join in?
Posted by Keziah Fenton at 11:05 PM 3 comments: 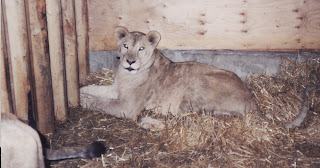 Maybe some day I'll be able to tell the story of lions in the garage. Until then, I have some great memories about the kitten who punched the lion in the nose.
Posted by Keziah Fenton at 12:24 PM 3 comments: