Okay, I didn't reach last week's goal by any stretch. I did get a lot done. 5,000 photographs are a lot to sort through. I think I looked at 361 and my eyes crossed. The good news is I can chop 1700 off the list, as soon as I find them in the unnamed folders, because Casey did not go to Scotland with me.

This week is a heavy work week and I start two more courses.  Apparently, there is a box of plants in the garage that needs to make it into the ground, too.  Ky's water therapy was derailed by an injury to both left legs. He got tangled in the ramp when he went after his ball in the pool. He's on steady massage therapy this week.  I'm a busy woman.

I've amended the goal to inputting a minimum one page per day.  It doesn't sound like much but if you could see the chicken scratch all over the current pages you'd realize that amounts to possibly 1,000 words a day.  Except for page 7. It has five words.

How does your week look?
Posted by Keziah Fenton at 5:10 PM No comments:

I finished the penultimate draft of Casey's story after a push from Miz Elen. In one of those odd quirks of life, it was actually Casey's second birthday when I lay down my pen.

I'm pleased with it so far.  There are some details that need to be added, some research to verify and photos to go through before I send it off to Readers. Next week I work ten days straight and start two new library courses so I want to get as much done as possible this coming week.  The whirling dervish's path of destruction in the yard has been repaired so I have some time.  He can't exactly be left unattended out there as he treats the new sod like a salad bar but I can fact check and eyeball him at the same time.

My goal is to send Heal Casey out by the middle of June.  It's nose-to-the-grindstone-time, people.
Posted by Keziah Fenton at 8:03 AM 1 comment:

I love back stories.  Whenever I hear something on the radio or tv, I immediately want to know how or why it happened.  I can spend hours(days, weeks or even years) trying to figure out how a rumour started, if subject A is really telling the truth and why is subject B a pathological liar. Why are some people extreme and others midline? Who took the cookie from the cookie jar? And why won't they share?

An entire episode of LOST was devoted to back story last week. I enjoyed it immensely, but most people did not. I think we may have all been confused but that's alright. At some point it will make sense.  I'm okay with waiting until that time.

There are exceptions to my back story interest.  I read a book yesterday, non-fiction, that was half back story and the other half a recitation of facts. It never really took me where the book jacket suggested it would. I suspect the writing style is what put me off more than the content. A dry list of who went where and with whom. No interesting details or conversations. I would love to take my dog out for a walk in the Highlands but it's the conversations(between him and I, or the ones in my head) that anchor those moments.  Ky always investigates the flora, fauna and wildlife that I point out to him on our walks.  If another human accompanies me, those are the times we discuss the "important" details of life.  We invariably solve all the problems of the world.

Yet in my own writing, I usually forget back story. I jump right into the moment and barrel forward full speed ahead. I have to go back in subsequent drafts and fill in motivation.  I know it all, but rarely include it because I figured it all out often several months previous to the actual writing. Back story conversations are a cornerstone of many of our walks.

Motivation not only propels characters forward. It is rooted in back story. How or why a person behaves is usually in response, positive or negative, to an event or way of life that happened in the past. Five minutes ago or five centuries in the past matters not. It happened off-screen, and most importantly, shaped the character.

Not everyone cares about the why, especially in action adventures. Good guy chases bad guy is enough information for most. The books and movies that satisfy me the most are the ones that make me think about how or why the good guy became so devoted to his path while the bad guy blew his up.

What about you? Are you a fan of back story or does it annoy you?
Posted by Keziah Fenton at 11:58 AM 3 comments: 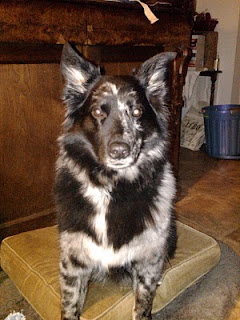 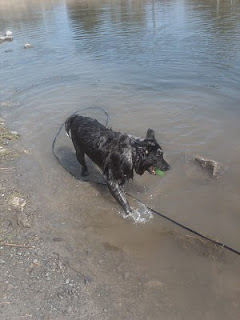 Walking back home, then massaging his thigh, I couldn't help but think how the dogs' healing had come full circle. Ky went to a chiropractor which helped Casey. The chiropractor recommended Pawsability for Casey which in turn led to Canine Wellness. Casey's appointments led to Ky's swimming and now I have two dogs in therapy helping each other heal.
Posted by Keziah Fenton at 10:56 AM 3 comments: