For as long as I can remember I was looking for my special ring. I knew it was out there somewhere. I rooted through junk tables, flea markets and jewelry boxes. I didn't know what it looked like and assumed it was a ruby. Not sure why that stone other than its dark hue appealed to me.

Almost twenty years ago my mom's friend was sorting through necklaces, rings, bracelets and earrings. I don't remember what we were even talking about but she handed me a plain silver ring and suggested I try it on. It fit perfectly. I have ridiculously large man hands so that was no small feat that. The friend looked at me, looked at my hand and told me to keep the ring. It had been her grandmother's back when she worked at Balmoral Castle eighty years ago. Of course I refused to take it. It was this woman's family heirloom. But it looked like it belonged on my hand. It felt like it belonged. And I stopped searching for my ring because there it sat; no ruby but mine never-the-less. 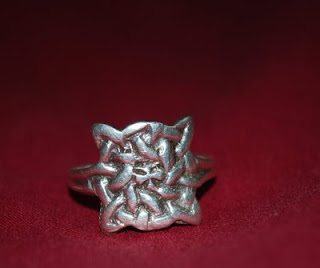 I rarely take it off. For a variety of reasons, many of which I can't explain, that ring is part of my identity. There are times when it melts itself into my finger and I have to remove it for both of our sakes. It is almost a living symbol of endurance and persistence.

On Thursday it caught on a case of canned dog food while I was at work. Emotion swamped me. It took a couple of days for the injury to my hand to reveal itself but there was enough force in freeing the ring that this is what it now looks like... 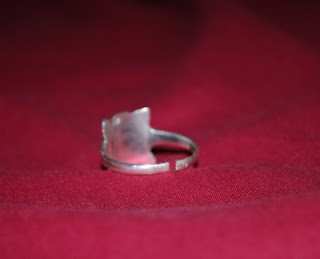 My wrist is sprained as is my ring finger. I'm typing for the most part with one hand. I'm ambidextrous enough that my hand-writing and most other activities are passable. Driving is more difficult than I expected. I'm managing. It's only a sprain. But the split in the ring...it's quite likely it is repairable. It will be smaller which means it won't fit on my finger anymore.

I feel naked and vulnerable without it, emotionally as well as physically. I've tried wearing other rings but they don't feel right. I spent so much of my life looking for that one ring that it's irreplaceable. At some point, another ring will come along and forge a bond with me but not yet.

I'm reflecting not only on the way we found each other but the many stories this ring has told me over the years. Hopes lost and found, long journeys, multiple owners, star-crossed lovers, a link to the past, to other lifetimes, a pledge of loyalty and troth.

An inanimate object to you, a repository of my life.

Ring Update - the jewelry repair shop now has it. In ten days it will be back in my possession and on my finger. They are going to add silver to maintain the size. They suggested I reshank it but that reeks of a prison term to me so I declined. It actually means they replace the band that fits palm side on your finger and holds the decorative piece together. My finger and hand are a tad bruised and it's now been a week but thanks to an incredible massage and adjustment, I can type again. Whee! No excuse not to write. Except I'm taking Casey for a swim in the pool. So it's research. If you can call it that.
Posted by Keziah Fenton at 12:14 PM 4 comments: 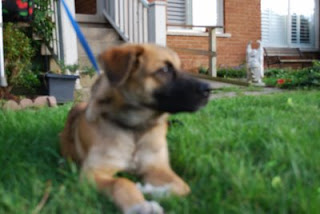 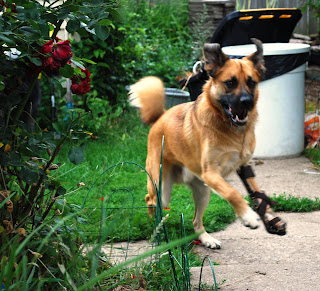 My word count was low this week, as was my progress. I had planned to finish a read-through of Hell to Pay before passing it off to my critique partner. I had not planned on getting called into work a few extra shifts, two sleepless nights and a thorough mutiny of my brain cells.

Not much got done. But as I was walking out to my car last night after working twelve hours, my first thought was, "I can't wait to get home and write. Write? Who am I kidding?" I was hard-pressed to say my own name at that point. I'm not twenty years old any more. Those double shifts take more out of me than I'd like to admit.

Next week won't be much better. I'm hoping I get more sleep so that I can at least tolerate the work hours better. I have been carting a small notebook around with me so that any random writing thoughts get recorded. There's absolutely no way I'm trusting my memory at this point.

I don't even have the energy to drive past the Brooding Tree to get back into setting. 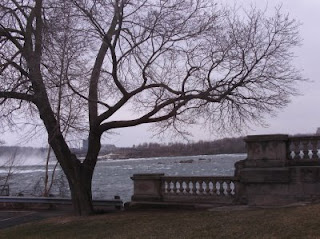 What do you do to keep the writing in the forefront when life tries to push it out of the way?
Posted by Keziah Fenton at 7:57 PM No comments:

Most of you will remember last summer when Stashaholic and I spent a crazy weekend watching documentaries, drinking wine and searching for Highland Cows.

That was the weekend she became obsessed with a sweater and I with an Icelandic fleece. It was also the conception of two of my current projects and one big dilemma. As I've previously mentioned, I'm now spinning. Stashaholic completely enabled me with the gift of the lovely spindles in my header. Several weeks ago she introduced me to this lovely girl, who has yet to tell me her name but now that we live together I'm sure she'll tell me soon. 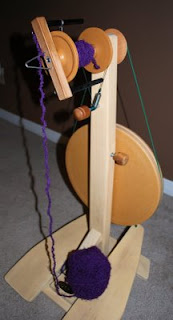 This is research. Honestly. I cannot write about spinning if I don't know how to spin. While the sweater book was intended to appease both of our obsessions. I did get to spindle some nice Icelandic fleece... 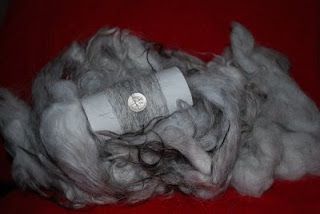 ... but I still want to go to Iceland and pick up some fleece straight from the source.

I have a lot to learn about spinning. A lot. It's hard to write the experienced character's viewpoint when I haven't a clue what she's talking about. Filming that learning process could make for a good how-to video. The making of that video could be easily quite entertaining. Every time I watch this I think how much easier it is to fictionalize that whole process. Writing only requires pen, paper and my imagination. Film-making is a team effort. So far I haven't convinced any of the players to join the team. I'm not sure I should try.

Perhaps it's best to wait until the book is written before I worry about film options.
Posted by Keziah Fenton at 9:41 PM 1 comment: