Writing and knitting and bears, oh my

I've been busy with Bear Bear and nieces and editing and finishing projects. I should have photos and stories to share shortly.  The only thing I've actually completed is the sweater I started knitting during the Winter Olympics a year ago. I had to stop because of the elbow injury.  Now that's as good as it's going to get(considerably better than it was) I'm incorporating more of my activities back into my life.

I've also done a fair amount of shoveling. Not Boston marathons of shoveling but enough every day that my upper body is starting to look good. Mother Nature is a very effective trainer, and less expensive than a gym membership.  I am one of the happy minority enjoying this winter.

What's new in your neck of the woods? (and why do we call it that?)

Posted by Keziah Fenton at 12:59 PM No comments:

#How librarians spend their breaks

This is the short story I wrote when we found a little bear in the lost and found at work.  It is the first in a series of adventure for the lost bear my coworker named.
We're promoting it every where in the hope that his family sees his photo and claims him. 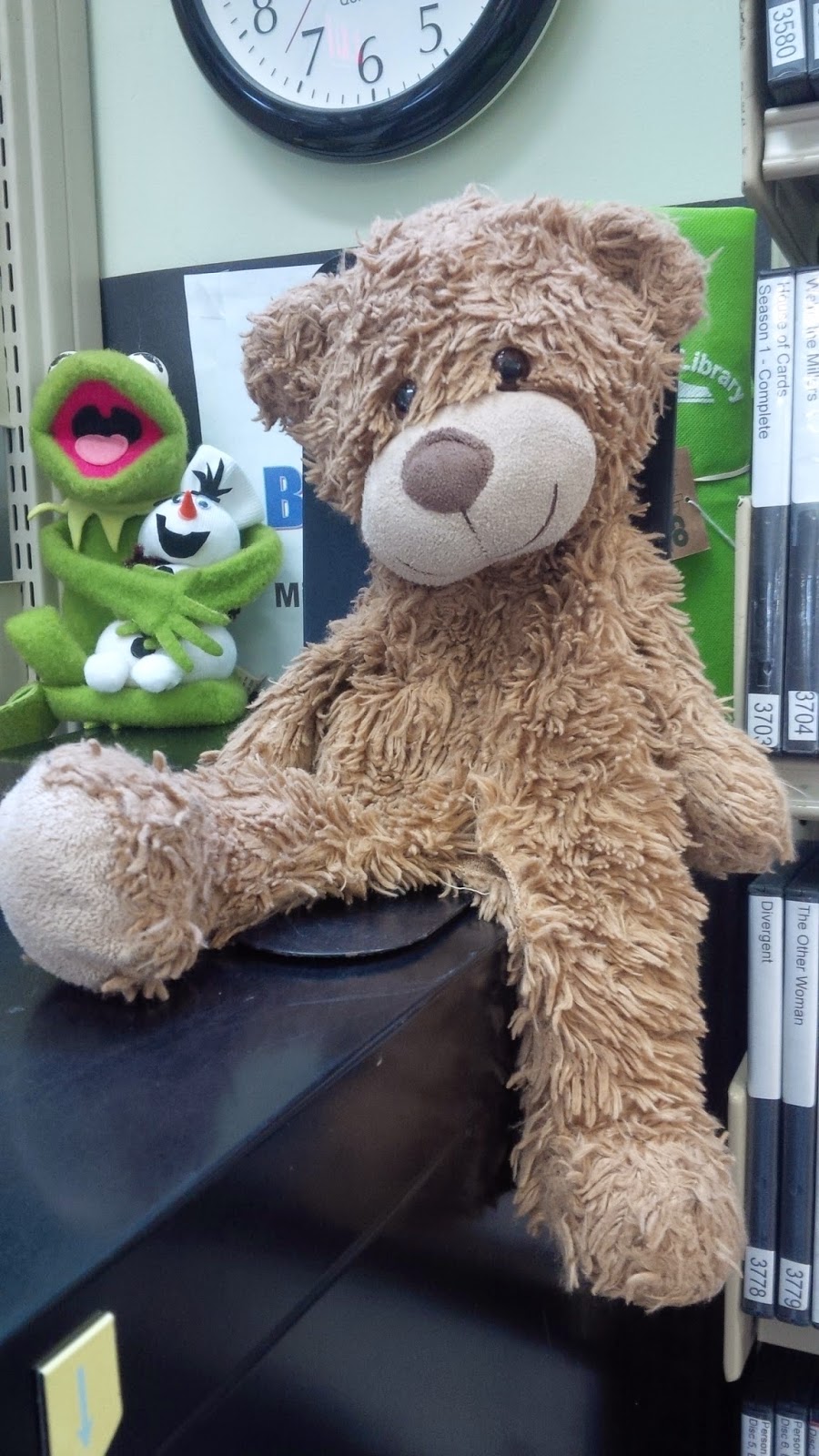 Bear Bear was scared. His family was lost. This place was nice. Bright. Smelled like books.
He liked books. But his family wasn't here. The lady behind the counter picked him up from the couch and put him on the cabinet. He could see everyone who came into this sunny place. The lady talked to him. She was nice. She petted him and told him she would help him find his family.
But first he needed a bath.
Not a bath! A bath would ruin his stuffing. He didn't have much stuffing left. His family had loved it right out of him.
The nice lady said bears had to be clean to stay at the library.
He was at the library! His family loved the library. There were stories and games and movies and lots of fun things to do while he waited for them to come back.
Bear Bear decided a bath would be okay. He would have a bath and sit on the cabinet and wait. His family would come back and see him up there.
The library was a safe place to wait. Maybe he could read a good book while he waited.
Posted by Keziah Fenton at 8:44 PM 4 comments:

They say if you're stuck writing one thing you should dive into something completely out of your comfort zone.  I didn't write for almost two years. I futzed at stuff but nothing that moved stories forward.  It was a bleak time.

Then I wrote a horror story and words flowed. The images that flickered behind my eyes were so powerful I had to record them.  It was cathartic in a lot of ways.  I'd been processing so much grief and rage that it was easy to understand not only the motivation but emotions of those characters.

When I was done that story I felt better about myself as both a writer and a human being.  It's a good piece. It needs some tweaking and I'll get to that sooner rather than later.

The horror story made it possible for me to go back to writing romance. I not only believed in the power of love again,but that I had something interesting to say about it.  The demons that had held me back from writing had been exorcised as part of writing the horror story.

Last week, someone left their little stuffed bear at work.  So far I've written three stories about that little bear. More importantly, I've finished the rough draft of the novel-in-progress and am on track to finish the Hit by a Truck edits by the end of the month.  I've been writing so much I've neglected the blog. Most of what I'm doing is the old pen and paper edits.  I even took them to the doctor's office yesterday and worked away on the exam table.  Why do they make you change into a thin cotton gown then wait 20 minutes for the doctor to appear?  No problem, that was 20 minutes I put to good use.

What's the most interesting way you've heard of people switching gears for a project?
Posted by Keziah Fenton at 12:31 PM 1 comment: