Most creative book trailer ever

I fully intend to buy these books entirely because of the book trailer.
Enjoy

Another week goes by

Still had a fever and cough but at least I was finally able to read this past week. I went through 80% of my TBR pile. Not sure how much I retained, which is why I didn't do any of my own writing; though I did think about Bracken and Bryna for the first time in many months.

I read, in no particular order, books by:
Jill Shalvis
Karen Rose
Susan Wiggs
Kerreyln Sparks
Maggie Shayne
Kristen Higgans
a lovely book about a Toronto suburb The Beach by Glenn Cochrane
and The Knitter's Book of Wool because it has such pretty patterns. And sheep.

I just spied Alex and Me by Irene Pepperberg on my shelf. I should read that next. It might give me some insight into life with Yoda, the Quaker parakeet blessed with an abundance of personality. I should have had a look at my own shelves before I begged a ride to the bookstore...

I did some of my reading, wrapped up warmly, on a lounge chair by the pond. It doesn't look like any of the fish made it through this past winter.

I just realized yesterday that I still have the third, and final, season of the BBC's Robin Hood. Something to consider as I work on building my strength back up this week.
Posted by Keziah Fenton at 10:38 AM 3 comments:

I've been a lot sicker since I got home than when I last blogged, hence the lack of communication. I've barely been coherent. Sadly, I haven't had the attention span to read or write at all this week. It took me four hours to watch The Blind Side because my brain could only process so much at a time. I'd turn it off. Let the dog outside. Try to catch my breath from all that movement. Let the dog back in. Get another glass of orange juice, ginger ale or popsicle then start all over again. Four hours. One movie. Not a great week.

all of which led to strange questions -
why do they call Kraft Singles Processed Cheese? Isn't all cheese processed? It doesn't come out of the cow as a large block of cheddar.

Why does Ray Liotta always play scumbags? He has a reputation of being a really nice guy but as soon as I see him walk on screen I know he's a sleazy character.

If the Coast Guard flies when everyone else is grounded, does that mean helicopters are less susceptible to weather than airplanes? Why does Ashton Kutcher always look so smug, no matter what he's doing?

How old is Michael Keaton? Remember when he was Beetlejuice? He's still funny. And I like Jane Lynch. How did they cut that casket down to make the boxcar? That made no sense. What kind of tools did the guy have in his garage??

How did she save him? She'd seen him before so that whole sequence, the climax of the movie was completely lost in translation. Perhaps if I'd read the Swedish book on which the movie was made. Okay, it was interesting right up to that point, I had suspended all belief. Then they blew it.

Is Where's Fluffy? a real band? Won't her father hunt them down with a shotgun when he hears that recording. Two movies in one day where Jimi Hendrix was an invisible, unseen, off-screen IMPORTANT character. Three if you count the Purple Haze that's flying over Europe these days.

Who the hell are the good guys on Lost? I'm so confused.

Remember the original V? Freddy Kruger and the mouse? I preferred the campy original.

Those questions, and many more, are the reason I should stay off the Internet when I'm not firing on all cylinders. Not even close.

Hope you all had a better week.
Posted by Keziah Fenton at 11:58 AM 5 comments:

I'm sidelined with bronchitis and unable to enact Plan A - learning to snowboard. Instead I'm sitting in a Starbucks in Whistler, watching all the boarders and skiiers come in from a great day on the slopes. Maybe tomorrow, with inhaler in hand, I may be able to join them. In the meantime, I'm engaged in Plan B - working on Casey's story. I miss the dogs a great deal more than I do the humans(trust me, they will all understand that) so it's nice to review the last couple of years with Dad's "little brown bear".

My nephew and I drover nine hours on Saturday to have Easter dinner with my aunt and uncle, cousin and her family. Not only was it fantastic to see family in their own environment, we shared genealogy stories and I got to pet dogs. Spending time with family while so far from home was wonderful.

We also had an incredible drive. 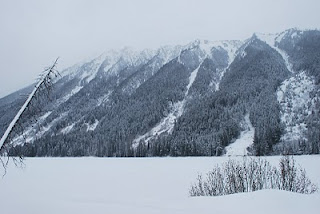 I fly home next Sunday. I imagine the blog will be a couple of days late next week as well.

In the meantime, I plan to take it easy, work on Casey's story and breathe deep - as deeply as bronchitis will allow. This fresh mountain air is amazing. While Plan A may take a few days to be realized, Plan B isn't too shabby. You can't beat the view I have right now.
Posted by Keziah Fenton at 7:07 PM No comments: