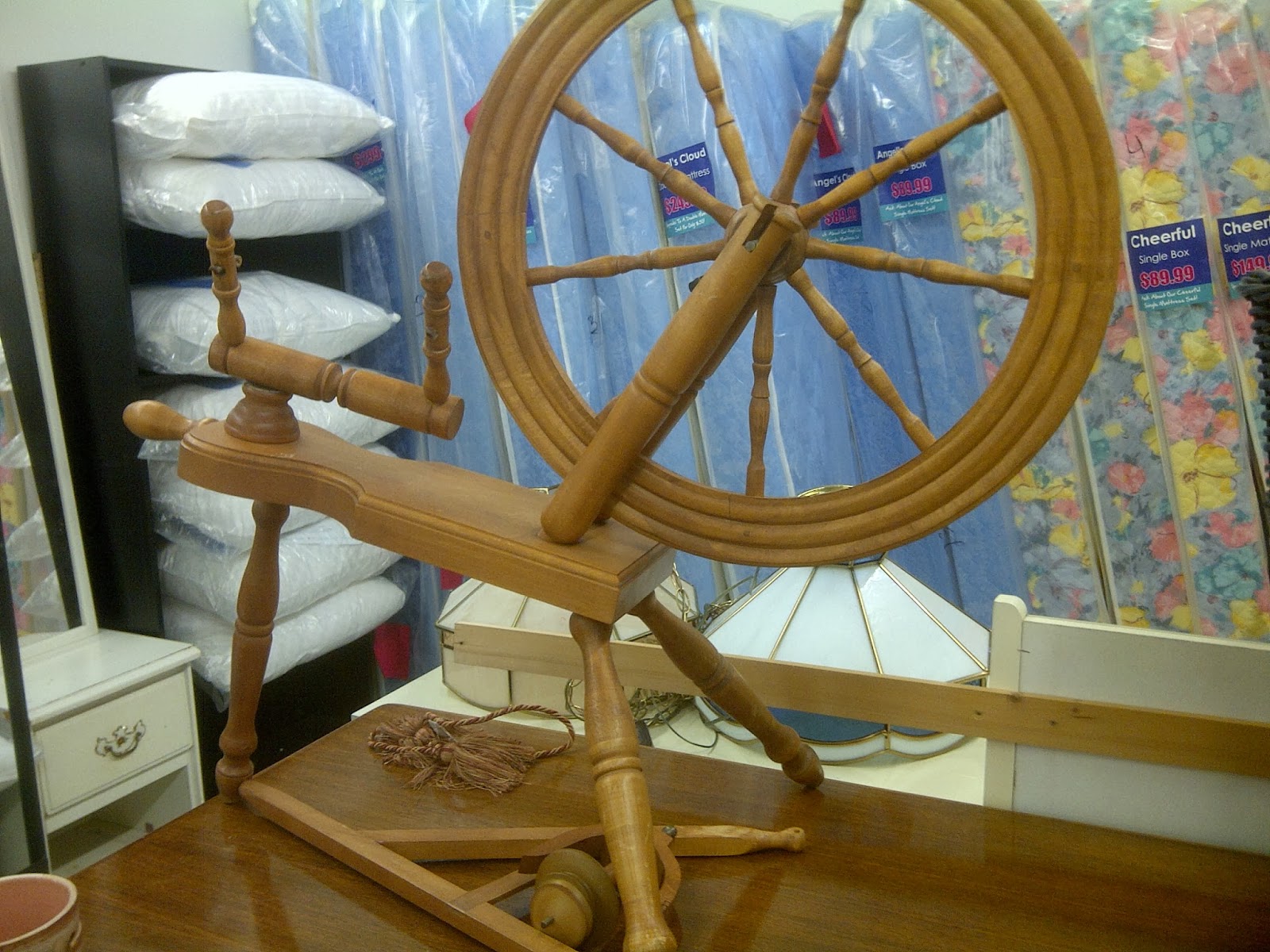 Several text messages with Stashaholic later and I brought the sad wheel home. She needs some work, and some parts, but I'm anxious to get to know her.  She certainly inspires the creativity I called into my life for this year.

I said I'd be around more and showed up less. I'm scheduling things a bit differently. Time on the laptop is for writing and minimal play. The tablet and phone are for playtime but then the Olympics happened. I couldn't get excited about them for a lot of political and controversial reasons. The IOC is never going to change. Corruption and controversy will dog them until people demand a change. I wasn't boycotting. I support our athletes. I donate to their funding, shop at their sponsors and cheer loud.  On Day 6, I got sucked in and never looked back.

At the beginning of the year, I had decided to knit myself a top as part of the Olympic viewing spree. I cobbled together three patterns and bought the yarn.  I worked on it while watching other things.  I had five inches of red Maple Leaf lace by the time I did join the rest of the country in Olympic-mania.  It's a complicated pattern and men's hockey caused me to rip out five out of every seven rows I knitted.

More ridiculous stuff happened at home that required an incredible amount of my attention.  Everyone survived. But it turns out I wasn't sleeping on my arm wrong. I had dislocated my elbow, pinched a nerve and got tendonitis there.  No more knitting. No more typing and really no more using the left arm until it heals.  Progress has been made. Today, I scratched my ear when it itched.

I can type one-handed on my tablet so I have been using it more often.  I can write with pen and paper so I should finish section three this week. The Olympics are over so I can wear something other than red and white, turn the television off during the day and go back to rooting for my favourite players(they played for their home country. Imagine that)

I'm going back to posting One Good Thing.  Maybe not every day, although I do still keep track at the end of the day, quietly and to myself.  But at least once a week.

Because it's important to remember that flowers grow even in gardens of stone.
Posted by Keziah Fenton at 7:34 PM No comments:

The idea of being creative this year has not extended to the blog.  I've been writing every day but get easily distracted so I've been using pen and paper. When I get near the computer, Doctor Who sucks me in. For someone who had never seen a single episode until Christmas Day, I'm addicted.

One of the other things that I really want to accomplish this year is to stop apologizing.  It's not that I don't think my opinions, beliefs and actions are invalid so much as I don't like to offend people or prosthelytize. There's a reason we don't all think the same way.  Regardless, I'd prefer to have discussions or lead through example.  I've been working on it.

Today was less than exciting, I cleaned out the bedroom closet, and mended a huge stack of clothes that had taken over a corner of my bedroom.  Fascinating stuff there.  Apparently, about 15 years ago, I was awash in beige.  Or olive green.  Perhaps the occasional washed out blue that no one notices.  Even the multi-coloured clothes were pastel. I remember being pastel.  I was surrounded by loud jewel-toned people.  I thought being pastel gave depth to the view.

Funny thing about colours. They can change your mood. Feeling blah?  Throw on a red shirt. Or neon yellow. How about bright orange?  My closet looks a bit more Benetton now.  It's odd that I'm still wearing a blouse I wore thirty years ago but cannot fit into one that's only two years old. Clothes, and styles, are so different now.  I'm irritated that I donated a hat to Goodwill on the last purge simply because I hadn't worn it in ten years. I want to wear it now. I'm in that style in this moment. Plus, I have such great memories of buying that hat in a shop in Charlottetown and my grandma giving me grief for wasting my money. I told her it reminded me of her father's driving cap.  She still thought I was wasteful but had good taste.

I'm in a bit of quiet time at home while my brain sorts out new patterns and behaviours. They're not quite set enough to take out for a spin in the world so I putter here in the meantime.  It's the beginning of February and I've been quite productive so far.  I'll endeavour to get over here more often.

What have you been up to?

Posted by Keziah Fenton at 12:15 AM No comments: