A book judged by its cover

I was putting some books away at the library a couple of weeks ago when this one caught my eye. 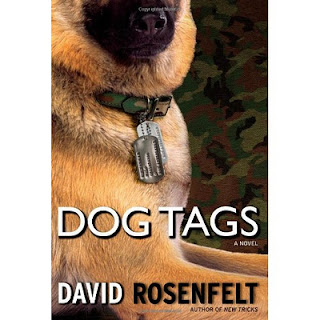 The dog obviously caught my eye. Nice clean graphics made it easy to remember book title and author. The back cover copy piqued my interest.

A German Shepherd police dog witnesses a murder and if his owner--an Iraq war vet and former cop-turned-thief--is convicted of the crime, the dog could be put down. Few rival Andy Carpenter's affection for dogs, and he decides to represent the poor canine. As Andy struggles to convince a judge that this dog should be set free, he discovers that the dog and his owner have become involved unwittingly in a case of much greater proportions than the one they've been charged with. Andy will have to call upon the unique abilities of this ex-police dog to help solve the crime and prevent a catastrophic event from taking place.

I checked our catalogue and discovered another book by the same author. But this was a series and we didn't have the first book. We did have the first five books in e-book format. The Sony reader saved the day and I've been hooked on the series ever since.

David Rosenfelt's voice is light, amusing but with a conscience. The books don't take themselves too seriously but entertain me with the mystery and a modicum of suspense. They're perfect for boosting me out of my current funk.
Posted by Keziah Fenton at 2:56 PM