My talented DNe gave a talk at the NXNE festival in Toronto today.  We managed not to get killed in the crazy city traffic where people walk behind a car backing into a space, sudden stops, abrupt left turns and other madness.

We checked out a fantastic talk by Johnny Cupcakes in which DNe took him at his word about networking with everyone. During a brief lull in the talk, he approached the man on stage.  Granted, it was to apologize for our leaving before the talk was over but email addresses were exchanged.   The whole thing was really cool as this is an entrepreneur DNe has admired for some time. We had a small window before his own talk, and Johnny Cupcakes was the window display.  Very cool. And worth the $30 parking ticket. 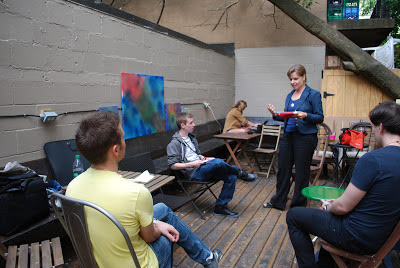 The bulk of it was over and we were sitting outside on the patio with other attendees discussing the many variables of being creative when the rains came. I had run the paintings indoors with the first drops.  A few hardy people stayed outside talking in the downpour but eventually moved inside to continue the conversation.  More email addresses were exchanged.

NXNE has been introducing the world to amazing new bands for 19 years. This is the inaugural art festival.  If you're in Toronto this weekend, check out both.  There is so much to see, to hear.

It was wonderful to hear the passion in DNe's voice, to watch him engage other people in creative conversations.  Art really can change the world.

Who is your favourite artist?
Posted by Keziah Fenton at 10:54 PM