We spent the afternoon with my Great Aunt.  She's going to be one hundred years old this June and she's still sharp as a tack.  She's funny and smart and kind and a true sweetheart.  When I went to Scotland in 2010, it was to take a picture of the farm on which her mother was born. 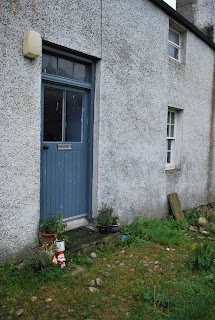 I had intended to call my aunt when we were there but I was so swept away by the fact that I was walking in my great-grandmother's footsteps that I forgot.  I came home with over 200 photos of the farm and nearby village of Dunkeld, every one of which tickled my aunt no end.  Now whenever we see each other, we share tea and Campbell's shortbread.  That trip always comes up in conversation.  It's not the only thing we talk about - gardens, bagpipes, travel, religion and art we are up for discussion today.

As always, my dad shared a story I'd never heard before, this one about hockey.  He has some great hockey stories. Everyone on their street played it. Some of them went on to play in the NHL.  He has no illusions that he was ever good enough to join them.

Tonight, everyone was home for a change so we had an impromptu hockey party.  My roommate is a die-hard Leafs fan.  She gets so excited that anyone sitting near her when they score is in danger of bodily injury. She leaps around while screaming. It's not much better when they are scored against.   The cat hopped off her lap tonight and headed to the chair across the room. He kept one eye on her as the Leafs scored.  No one knows if it was coincidence or extreme self-preservation but his timing was impeccable.  Sadly, the Leafs lost in a shoot-out but we were well-entertained.

Was your day entertaining?